Would you like to learn more?
Visit our Fort Terminology Page. 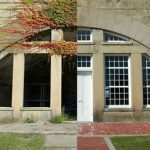 The single most prominent architectural feature of Fort Adams is Arches.

Bastions served much the same purpose as a medieval castle tower. They are projections from the main Fort walls, designed to allow the Forts defenders the ability to fire upon any exterior wall.

Fort Adams largest land defense element, the crownwork protect the forts entire south side from attack. Crownwork take their name because when viewed from above they have the appearance of a ‘crown.’ Fort Adams is the only US Fort with a full crownwork. Tenaille:

There are two tenaille in North America. Both are located at Fort Adams. The Tenaille were placed in front of Fort Adams, two main landward entrances, intended to protect them from direct cannon fire.

Embrasures and Loopholes are both openings in the Fort’s exterior wall designed to allow defenders within the walls to fire upon attacking forces. Small arms and rifles would be fired through loopholes whose narrow openings provide defenders the best protection. Embrasures can be found on both the Forts landward and seaward defenses. Typically lined in brick, embrasures have an hourglass shape designed to allow cannon crew the greatest field of fire while limited their exposure to enemy fire.