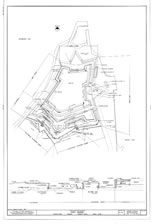 The Terminology of a Fortress

Every effort has been made to provide accurate definitions, however it should be noted that no two Forts are exactly the same and terms were often modified and definitions stretched to best fit in unique circumstances.